The Naturalist in her habitat

The chance to help sail a yacht from Sydney to the Whitsunday Islands over a few weeks of early winter seemed like a great way to escape from the short days of Tassie's winter.  I don't usually mind winter at all, hiking in the snow, clear crisp cold weather.  But it was wonderful to be warm and go snorkeling as often as possible.  It has been a while since I tried to identify tropical fishes on a coral reef and it took some practice.  Each snorkel meant that I came back with my head full of mental notes like, "some sort of butterflyfish with diagonal stripes - black and white; a wrasse with an orange beak-like snout; a bunch of little white guys with yellow quarters on the front."  Usually I would forget some salient point that would not allow me to identify very many fish.  But after many, many times in the water I had a few named and even fewer memorized.  But it was a great distraction and if I can't name them all, at least I have a great appreciation for the diversity!  A few illustrations: 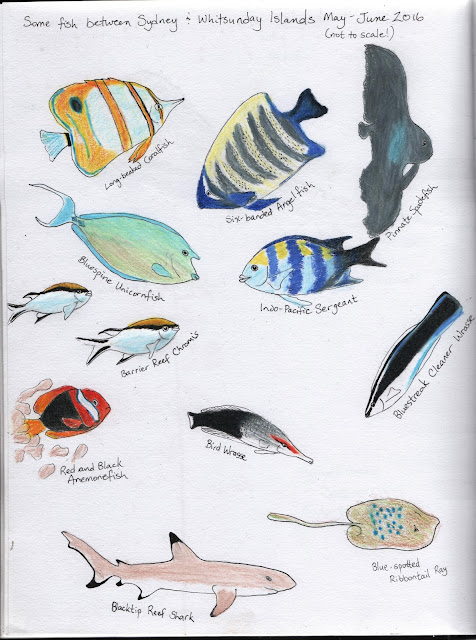 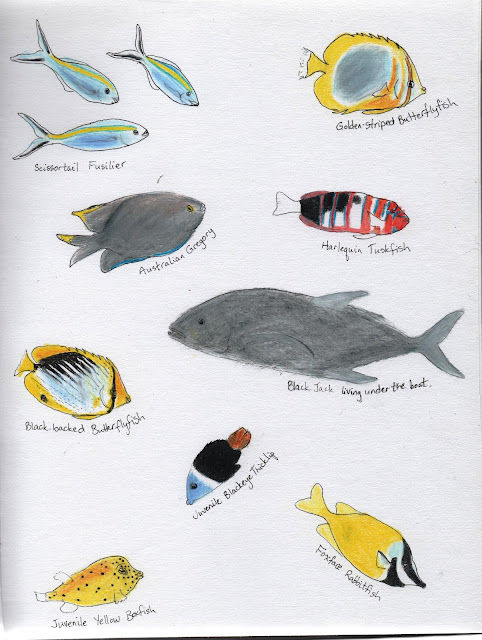 Posted by HeidiKraj at 22:32 No comments:

I was able to stay at Melaleuca in the remote SW of Tasmania for nearly an entire month.  We were volunteering for the Parks and Wildlife Service as well as spending a week hiking out to the SW Cape.  What a magic month!  We had a bit of everything for weather (it was March, still summer) and the wildlife was the real highlight.  Here follows our species list for the time we were there and hiking the south coast.

Species List for Melaleuca and the South Coast (March 2016):

Gourdin Island is a tiny island near the tip of the Antarctic Peninsula.  It is a magic spot and one of the rare places where all three species of brushtail penguin breed: Gentoo, Chinstrap and Adelie. Sitting anywhere on this island, watching the comical coming and going particular to these birds makes even the most staunch grumpy person smile, in fact penguins are the answer to world peace.  Make a group of world leaders stop and take notice of penguins and no wars could ever be waged.  Penguins are too much like people and their funny little ways make us laugh.  But make no mistake, these are tough little birds.  They are ruthless with each other if one is caught trespassing or stealing precious stones from a nest!

Travelling around Svalbard encountering walruses is exciting, especially at sea or on ice.  When they haul out on the beach, the males and females are segregated and not likely to be lying in the same pile.

While onboard an expedition passenger ship cruising around Svalbard, the most northerly archipelago of Norway we are always on the lookout for Polar Bears.  Both for our safety as we don't want to travel on land where there are bears nearby but mainly for our curiosity and enjoyment.  These majestic animals really are amazing to see in their environment.... the sea ice!  Here's a few drawings of their postures from a bit of time spent in the company of bears in the ice.

Atlantic Puffins!
﻿
Fair Isle is between the Orkney and Shetland Islands in Scotland.  It is wild and beautiful and has many nesting seabirds including Atlantic Puffins.  The following are a few behavior sketches, they must have chicks in the nest now as fish were being brought back to their burrows. 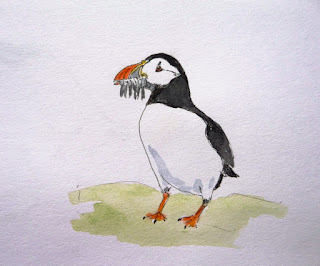 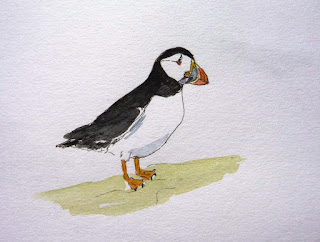 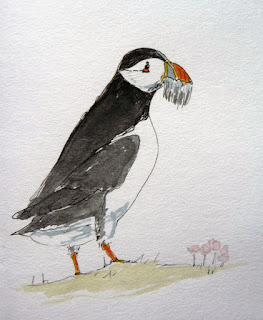 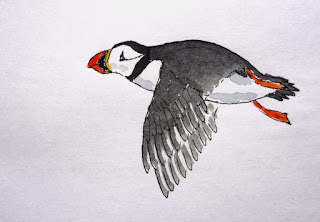 An unexpected, lovely week spent caretaking the lighthouse at Cape Bruny, at the south end of Bruny Island was a chance to slow down.  We watched Wedge-tailed Eagles soaring overhead looking for prey while the New Holland Honeyeaters would constantly flit from the coastal scrub and provide a chorus to our sojourn.